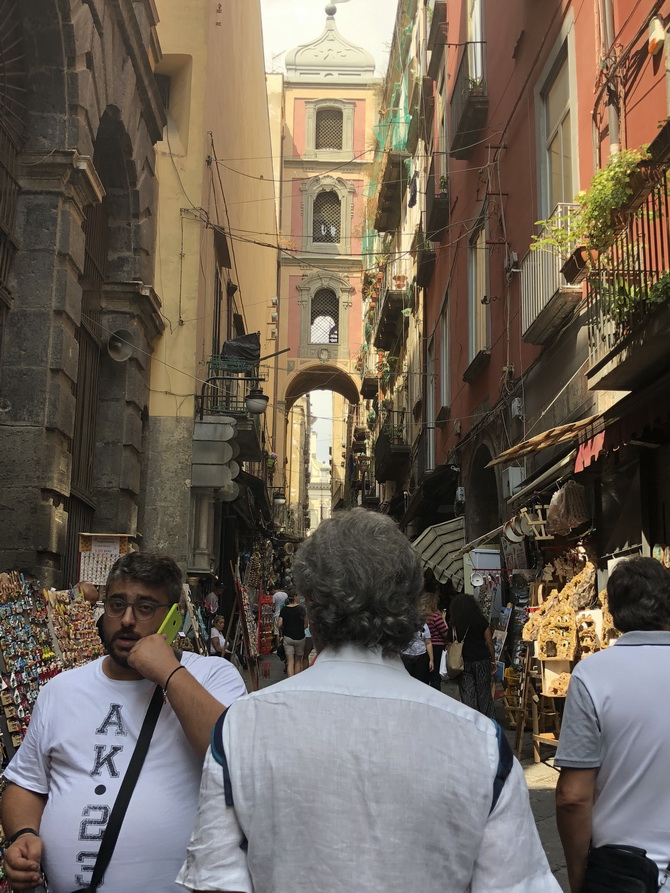 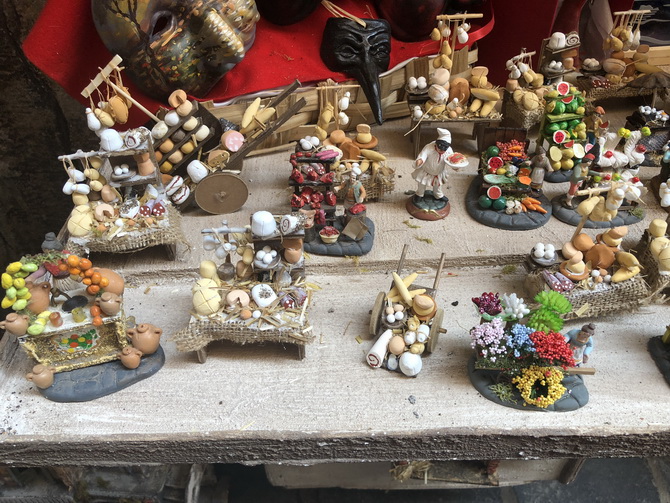 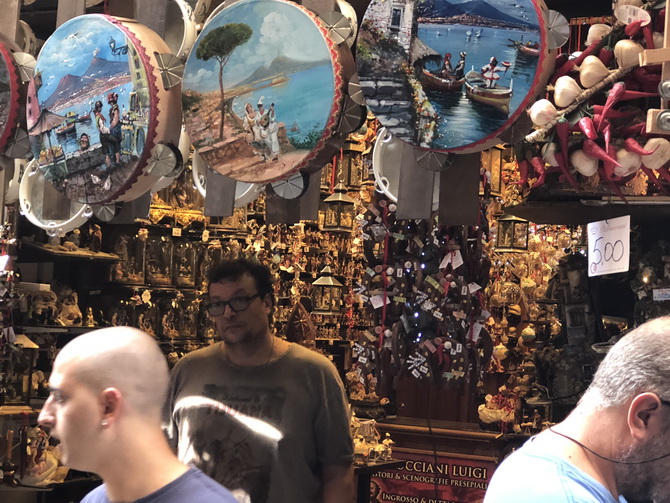 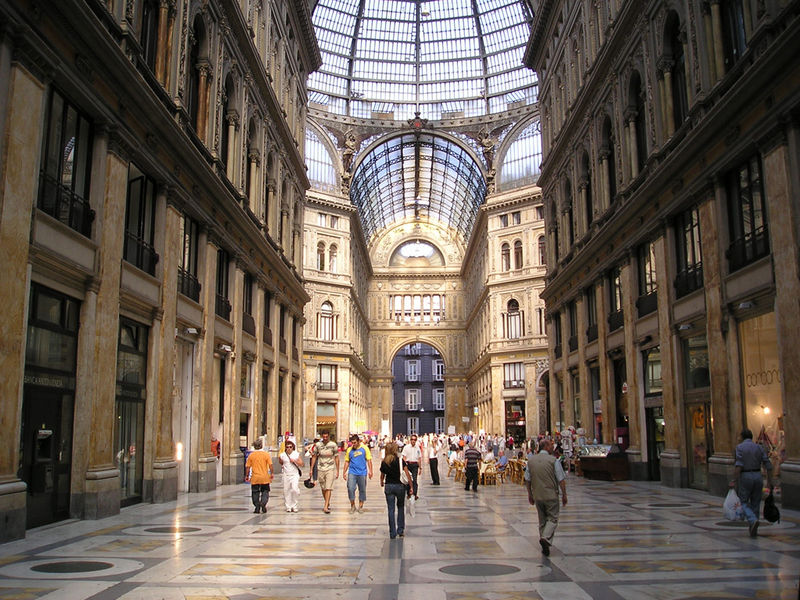 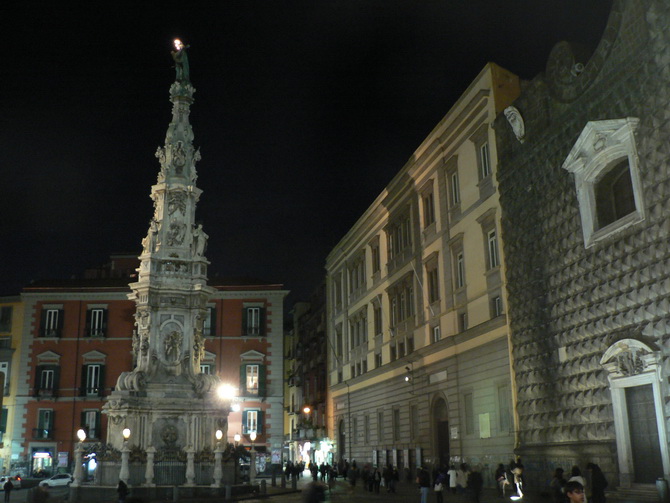 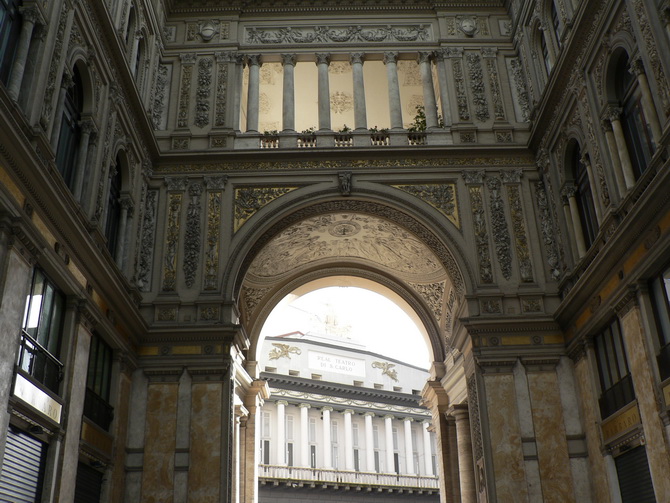 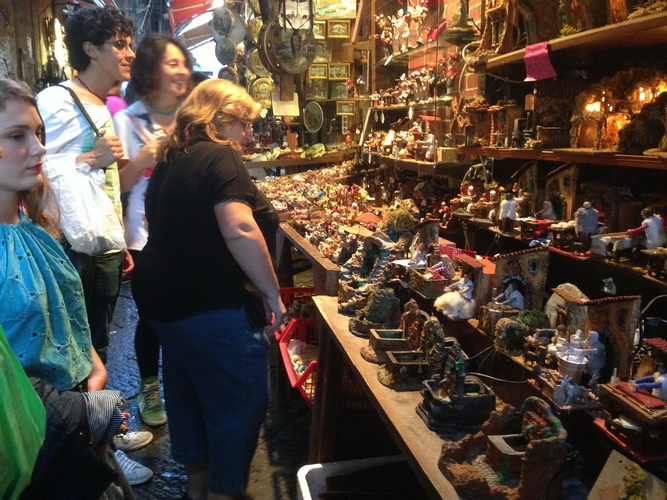 A walk with your own private guide for three hours, through the ancient heart of Naples called Spaccanapoli which has not changed for 500 years. It is as it was then. Fascinating, interesting, lively and full of interesting characters. Highly recommended by Passion for Italy. Your guide will drop you off at a recommended Pizzeria to taste the best pizzas in the world. This is where pizza was born so is THE place to eat pizza!

After enjoying the real Neapolitan coffee we start to discover the heart of Naples.
Our tour begins with a visit to two basilicas – antipodes in style, the rich GESU’ NUOVO CHURCH.
Built by the Jesuits between 1584 and 1601, on the area of Palazzo dei San Severino of which it still preserves the Façade made of trachytic rock with dog-tooth moulding (made in 1470 by Novello da San Lucano), it contains rich marble and pictorial decorations accomplished betweeen the XVI and XVIII century. After 1639’s fire Cosimo Fanzago took care of the restoration that gave the church its Baroque look. In 1771 Ferdinando Fuga directed some reinforcement works of the structure.

The church’s interiors, typically Baroque in style, has a Greek-cross plan, three naves and walls covered by polychromatic marbles. Many frescoes of great value among which La cacciata di Eliodoro dal tempio, of Francesco Solimena (1725) positioned inside on top of the portal and vault paintings by Paolo De Matteis and Belisario Corenzio.

In the chapels, precious canvases of Massimo Stanzione and Giuseppe Ribera. The sculptures are amazing and very rich, realized by marble workers that commenced in XVII century, creating the polychromatic marble floor and the marble covering of all the church’s walls.

We proceed to SANTA CHIARA CHURCH with its enigmatic and gothic façade. Erected between 1310 and 1328, it was probably built by Gagliardo Primario. The 1943 bombing destroyed most part of the original Gothic style construction, as for the Baroque style transformations done, during the 18th century, by Domenico Antonio Vaccaro. After the restoration in 1953, the church was built with Gothic shapes.

On the outside, the sober and austere yellow tuff façade with a triangular gable and a central rose-window, is preceded by a narthex with three ogival trachytic rock arches. The interior presents one big rectangular room with 9 lateral chapels on two sides, lighten by double and triple lancet windows. It has a wooden trussed roof.

The church contains the funerary monuments of the Anjou family, among which that of Robert of Anjou. In the Clarisse choir, fragments of Giotto’s frescoes concerning the Crucifixion can be admired. Particularly prestigious is Domenico Antonio Vaccaro’s cloister, which preserves 14th century pointed arches on octagonal pillars. Along the bench seats and other octagonal pillars to support the pergola covered with majolica tiles.
We continue through the streets lined with aristocratic palaces that hide stories and anecdotes before arriving in the magic triangle of the city. We arrive in SAN DOMENICO MAGGIORNE PIAZZA , one of the most beautiful piazzas in Naples: located right in the heart of the ancient Neapolis, is crossed by one of three farthings of greek-roman city, that of Spaccanapoli.

Features of the square are the polygonal apse and the steps of the church, the great central obelisk, the sixteenth-century Palazzo Corigliano, the palace Sangro Casacalenda and the palace Petrucci. The current layout of the piazza dates back to the Aragonese period and was ordered by Alfonso I of Aragon, who ordered the construction of the great staircase that joins the apse of the church.
Later were built the sixteenth and seventeenth century monumental buildings that complete the perimeter.

The central obelisk – pyramid shaped is decorated with marble, medallions and bas-reliefs and carries at its top a valuable statue of San Domenico Maggiore. It was commissioned in 1556 as a votive offering to the end of a terrible plague that decimated the city’s population. The work, however, lasted many years and after several stops and starts ended in 1737.

We continue to reach the corner of the street of Naples best known to the world: San Gregorio Armeno, a busy street in the center, reveals the heart of Naples artisan. The traditional shepherds of the crib, with thumbnails of new characters, inhabit the colorful stalls of the street.
Continuing our walk we go to visit the SAN SEVERO’CHAPEL – the site of the famous sculpture of the Veiled Christ.

San Severo’s Chapel, located in the heart of Naples, was created by Raimondo de Sangro, prince of San Severo (Torremaggiore 1710 – Napoli 1771), follower of the Enlightenment, a soldier, a man of letters, a patron of arts, the first maestro of the Neapolitan Masonry, and yet, most of all, a genial inventor. He granted an esoteric and obscure value to knowledge and this is why he was always reluctant to reveal its discoveries.

Part of his knowledge can be deduced from the chapel’s symbolism, a real jewel of the baroque creativity, beauty and mystery. Among its masterpieces are the “Veiled Christ”, famous for its marble texture of its veil, the “Release from deception” and cryptic anatomical models, an unresolved mystery still today: two skeletons or, according to some, the reconstruction of two skeleton with an impressive accurate reconstruction of the arteriovenous.

If we still have time to visit more, we will walk on to see the magnificent DUOMO.
Dedicated to Our Lady of the Assumption, even if commonly to San Gennaro, the Cathedral was built by Charles II of Anjou towards the end of the 13th century on the ground, where the Church of S. Stefania used to stand, near the Basilica di S. Restituta.

The Duomo was re-arranged various times. The façade was restored with its current pseudo-gothic shapes by E. Alvino and later modified by Pisanti. You can see three portals of the original building: the middle one, rich in sculptures, A Madonna col Bambino by Tino da Camaino and the column-bearing lions of Nicola Pisano’s school. The Latin cross interior has three naves: the middle on, covered by a palatial wooden ceiling, presents the paintings of L.Giordano.

In the right nave there’s the Cappella di San Gennaro o del Tesoro (1608-37), built after the vow of the Neapolitans, made on the 13 January 1527( S.Gennaro’s feast) to avert the damages of the plague. The Greek cross Chapel with the elegant and bright cupola, full of art works, is considered a separate Church and it represents one of the greatest expressions of the 17th century style in Naples: it preserves the reliquary bust of S.Gennaro by Giulio Finelli, a Gothic sculpture masterpiece.

Here the miracle of San Gennaro’s blood happens, the blood contained in the glass cruets, makes Neapolitans wait with bated breath twice a year. If the blood easily melts it is considered a good omen for the city, otherwise an ill omen. Attending this rite in first person is an unforgettable experience.
Guide will leave you at  a fantastic pizzeria for lunch or dinner.