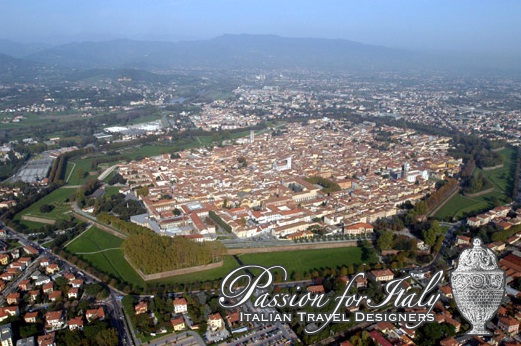 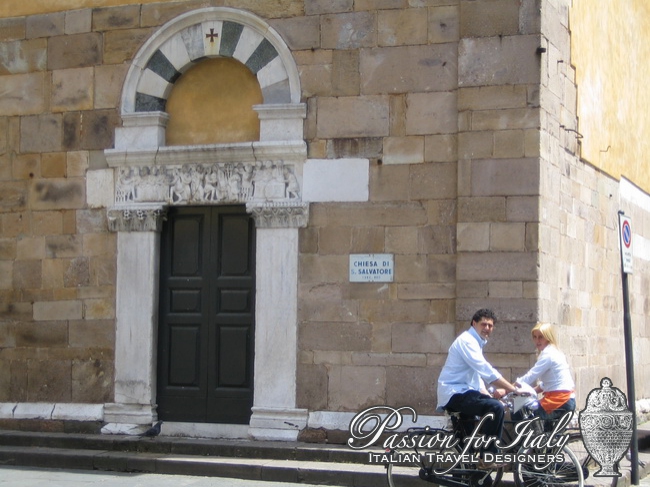 Lucca is situated in the northwest corner of Tuscany and is a world within itself. The centro storico part of the city is encircled by a fully intact wall constructed in the 16th century as a defensive structure. It is almost 4km in total length and green spaces have been added called ‘baluardos’ where one can come and soak up some sun on the grass or sit quietly on the benches provided.

The locals themselves often commence the evening passeggiata here, as it is wide enough to cycle and stroll along with the city vista below. The plane and chestnut trees that flank the edge of the walk are beautiful in any season but especially beautiful regaled in the glorious colours of Autumn, during the months October and November.

The cobbled streets of Lucca are also a delight to walk or cycle around and the main shopping street is in via Fillungo although there are wonderful shops to be found all around the town. The elegant window arrangements change constantly and the pride in the display is evident everywhere.

The old Republic of Lucca and its province offer unique locations for studying city and country life in Italy and Europe at the dawn of the modern period as well as for taking a closer look at the defence structures in use during the Renaissance. This particular period of history saw the revolution commenced by the introduction of gun powder and the resulting developments in defensive architecture, engineering, war-making techniques and to a large extent, in culture and daily life.

Writer from Vicenza, Guido Piovene, sustained that Lucca was the only city in Italy to remain totally enclosed and surrounded by high walls, built in the 16th and 17th centuries, which continued to conceal the city from those approaching from the surrounding plains. In the early 19th century, the harsh and forbidding appearance of the city’s walls was softened a little by a circle of trees planted on top of the solid walls, causing poet Gabriele D’Annunzio to celebrate Lucca as the “city of the wooded circle”.

In Lucca We Recommend…

The morning habit of a quick coffee and cake on the run is common here although Italians are not known to be big breakfast eaters generally speaking. The fresh locally made sfogliatellas filled with cream or chocolate are to die for as are little rice cakes called ‘budinos’ that are covered in icing sugar.

The city quietens down around 1pm when the shops close till 4pm. The many restaurants and trattorias come alive at this time and one can find anything from pizza by the slice, a foccaccia or a salad, to a full sit down meal.

Monday mornings however, are a good day for a sleep in, or a day trip as the local businesses don’t open until 4pm, if at all, as this is a day off for all the hairdressers in town.

The Puccini Opera Festival is in July and August every year. As this is very popular please book six months ahead as Lucca is only a small walled city and accommodation is limited in the town for this festival.

Lucca is located in north west Tuscany and is a 1 hr train from Florence – ideal for a day trip.