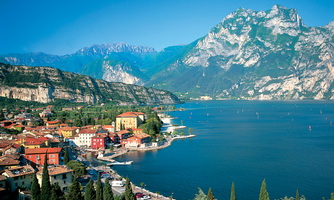 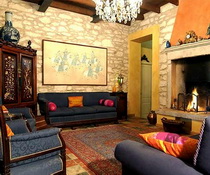 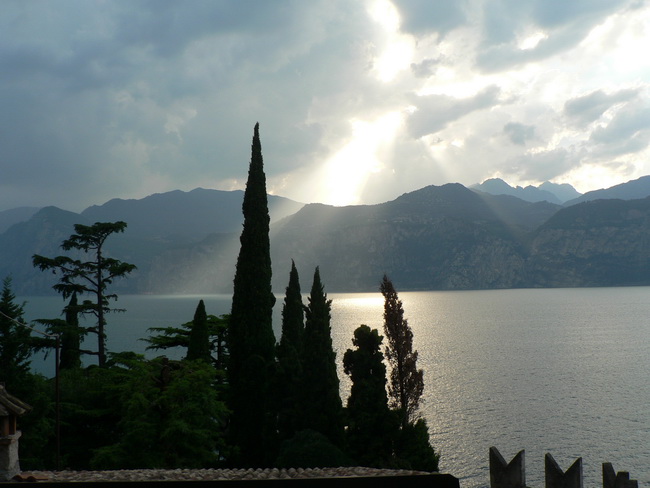 Lake Garda or Lago di Garda is half in Lombardy and half  in Il Veneto region in the north of Italy. The largest of the Italian lakes ( 370 sq km), it is well placed with all the connections, roads, rail and airport. Due to the Mediterranean climate, rich vegetation flourishes on the lake-shore: magnolias, bougainvilleas, olive trees, vineyards but what especially marks this territory is the lemon. Imagine, lemons, limes, and bergamots growing a few miles from the 46th parallel! And this has been going on for over 700 years, since (according to local tradition) St. Francis and a few friars started farming these fruits right by the lake.

Many beautiful lakeside towns have charmed foreign visitors for centuries. The area was a summer resort area for the ancient Romans, Sirmione, still today, has extensive remains of an enormous Roman Villa. Other villas have been discovered, together with roads and fortifications, along the entire Riviera of Olives, as the Veronese east bank of the Lake is called and where, not only is D.O.C. olive oil produced, but also famous D.O.C. wines, such as Bianco di Custoza and Bardolino.

In Lake Garda We Recommend…

Stay in an ancient restored convent on the Brescia side of the lake, with an evocative atmosphere that makes it an elite resort for discerning travellers to rediscover the same poetry, peace and beauty today that P.H. Lawrence, Nietzsche and Churchill found or stay on a historic country property, on the western shore, with its splendid view over the mountains and lake. A perfect place for travellers in search of beauty.

What To See Around Lake Garda

Riva del Garda is is one of the leading tourist spots, especially among sailing and windsurfing lovers. Some of its famous guests were Nietzsche (who stayed at Hotel Du Lac), the Hapsburg family, the Mann brothers, Kafka and D. H. Lawrence.

Pescheria del Garda is one of the most picturesque towns on the lake. Its historic center is inside 16th century walls and has several beautiful churches. The fortress was built in the 1860s by the Austrians.

Sirmione, The long and narrow strip of land extending out into the lake between Desenzano and Peschiera is an enchanting town with a medieval center dominated by a medieval castle. The ruins of the villa of Caius Valerius Catullus, senator of the Roman Empire are just outside the town. Carducci. For more than one hundred years, the Spa resort of Terme di Sirmione has been taking care of the health and well-being of its guests.

Salò is an elegant town of pastel houses. It has a lovely cathedral.

Gardone in the Brescia side of Garda, is known for its beautiful park with exotic plants. Its historic center dates from the middle ages and has both medieval and baroque buildings. Not to be missed a visit of “Vittoriale” the house of the visionary poet Gabriele D’annunzio.

Lake Garda Jazz Festival on the shores of the lake – Garda Trentino – Last week in June for three weeks.