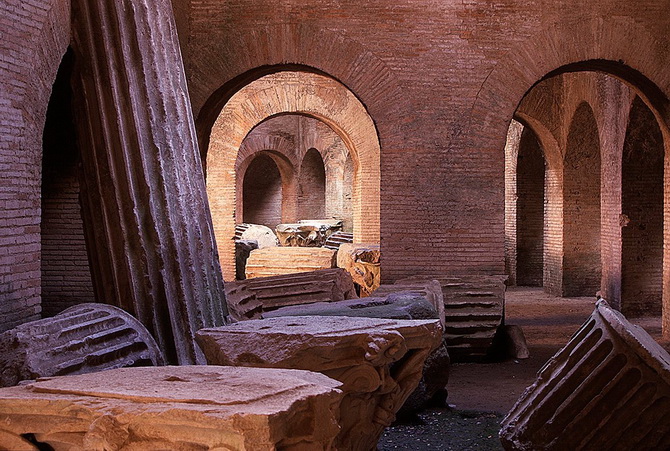 The Flavian Roman Ancient Amphitheater is located in Pozzuoli, Campania to the east of Naples. It is the third largest in Italy – seating up to 50,000 spectators. The gladiators fought here as they did in the Colosseum in Rome. Completed in the late 1st century of the Flavian dynasty.

In 305, the arena was the setting for the murder of seven Christians ordered by the Roman Emperor Docletian, including the patron of Pozzuoli, Saint Proculo, and the patron saint of Naples, Saint Genaro. Legend tells that, after a blessing from Genaro, the animals refused to eat their prey and bowed down before them. In the wake of this miracle, the martyrs were instead beheaded in the nearby volcano of Solfatara.

The Flavian Amphitheater is the second of two Roman amphitheaters built in Pozzuoli. The smaller and older amphitheater (Anfiteatro minore) has been almost totally destroyed by the construction of the Rome to Naples railway line. Only a dozen arches of this earlier work still exist. This lesser amphitheater measured 130 x 95 meters (427 x 312 feet).

The site of the structure was chosen at the nearby crossing of roads from Naples, Capua and Cumae. It was abandoned when it was partially buried by eruptions from the Solfatara volcano. During the Middle Ages, the marble used on the exterior was stripped, but the interior was left alone and is perfectly preserved. Excavations of the site were performed 1839 to 1845, 1880 to 1882, and finally in 1947.